A major feature of our worldwide tours is the recurring spontaneity. Often it is forced or in response to unpredictable circumstances, but sometimes it is a very conscious decision. Typical was the decision I took as I was planning for the Chinaplas exhibition. I decided spontaneously to extend the tour to another destination: the Philippines. 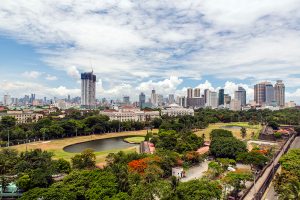 It would be brief and compact. Chinaplas ended on May 19, and whilst my colleague Johann had already departed that same evening for Germany, I flew to Manila a day later. With support from machine and equipment supplier Husky, appointments here at Coca-Cola Femsa and their Austrian in-house preformer Alpla awaited me in Manila and also in Cebu, an hour’s flight away.

I have never been to Manila before and simply selected a hotel which had positive online reviews. Thus, in the early evening I landed in Manila, in a quiet district in the heart of the city boasting a lot of beautiful Spanish architecture. The hotel, however, was a very different story. Rather shabby and filthy. On the roof terrace at dinner cockroaches as big as my hand scurry over my feet, and later in my room tiny ants share some crumbs from my crisps, which had fallen to the floor whilst I was tapping out my emails. And don’t get me started on all the stains in the room. I really am getting too old for this type of nonsense.

The next morning, Romano, Husky’s local representative, took me to our first appointment, a relaxed meeting with their customer Manly Plastics, one of the biggest converters here. In a café, I talk to the company’s CEO Jericson Co, about the future for PET in the country, and how things will progress. Romano has organised a dinner at “Barbara’s”, a beautiful heritage restaurant near where I am staying, with fantastic food and a remarkable live show of local music and dances. On the way there, I am particularly struck by the quirky transport arrangements, which Alex had already commented upon in Indonesia, whereby a trifling amount of money will get you transport to thread your way through the traffic to your destination. It’s already around 10pm before I get to bed. However, I know for certain that I am unlikely to get to sleep before 3am, thanks to the constant noise, both outside and within the hotel …

Waking up early after a thoroughly restless night, I pack my suitcase in preparation for my flight later in the day with Romano to Cebu and our appointments there. Promptly, at around an hour later, we arrive at the Coca-Cola plant, to be welcomed by Jorge Hernandez Martinez and his team. Since 2013, Coca-Cola Femsa, with its origins in Mexico, has made significant investments in the Philippines, and now has 19 plants for PET, glass and can filling. Among other equipment, there are two Krones Ergobloc L systems, each with 81,000 bph capacity – two of only five in the world of this size, I am informed. After an interesting tour of the facility, we continue to the in-house supplier Alpla, whose preforms are sent directly to the Coca-Cola area to the blowers. We go on to Alpla and I get the opportunity to interview the Austrian Thomas Ahrer, who is responsible here as the local General Manager for Alpla and he explains the partnership between the two companies. The weather is unbearably sultry with around 90% humidity and a temperature at a sweltering 35 degrees Celsius. I am very grateful for any flow of cool air.

After our two appointments, Romano and I drive to an extremely delicious Portuguese fingerfood restaurant, linked to a huge mall facility with countless shops. Since we have some spare time until our flight to Cebu, we decide to do a little shopping. At around 6pm we reach the airport. We were not aware that our flight had been delayed so we didn’t reach Cebu until nearly midnight. Completely shattered by an all-too-short and sleepless night, we arrive on time the following day at Coca-Cola’s Cebu plant, just to round off our tour. In the evening I meet Supakdee Sodsriwiboon of Husky Thailand, who has flown in for a customer visit and the three of us end up at the Ibiza Beach Club on one of the beautiful local beaches. Quite a way to conclude our tour!

And now, coming soon, stay tuned for Thailand and Laos!