There are now barely five months left until drinktec 2017 opens its doors in Munich. Before they begin their final round of preparations, the drinktec team have been busy traveling around the world to meet exhibitors, potential visitors, industry associations, and members of the press in person. They have been presenting the latest highlights, key themes, and trends, as well as prospects for the global beverage and liquid food industry, while also answering questions, making contacts and, of course, coordinating preparations for the world’s leading beverage and liquid food trade fair.

The trips started back in September 2016, with a visit to drinktec subsidiary food-and-drink-technology Africa (fdt) in South Africa, where a presentation was given. The next trip, in October, saw Dr Richard Pfeiffer, Deputy Managing Director of Messe München and Petra Westphal, Exhibition Group Director of drinktec, travel with Richard Clemens and Beatrix Fraese from the German Engineering Federation to visit CHINA BREW CHINA BEVERAGE (CBB), of which drinktec is co-organizer. Following the press conferences in Dubai and Bangalore, next on the itinerary was Mumbai, which is also the location for drink technology India (dti), December 15 – 17. 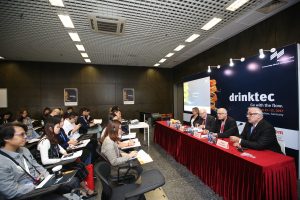 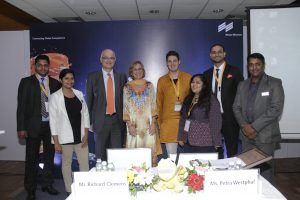 The drinktec team meets the Indian colleagues from dti.

After a quick break for Christmas and a few weeks to catch their breath, drinktec’s Project Management team packed their suitcases once again and headed off on their first little tour of Europe in mid-February. First stop was a press conference in Italy, followed by a trip to the Benelux countries. Using Amsterdam as her command center, Petra Westphal then managed to visit press publishers in six cities over a two-day period!

Next stop at the end of February was South East Asia. On this occasion, Georg Moller, a Divisional Director at Messe München, flew together with Richard Clemens (German Engineering Federation) to Thailand, Indonesia, the Philippines and Vietnam. The press conference in Manila in the Philippines proved of particular interest, and was attended by almost 100 people. Another highlight was the interesting presentation given by Nguyen Van Viet, Chair of the Vietnam Beer, Alcohol and Beverage Association, during the press conference in Hanoi City.

Georg Moller at the press conference in Thailand

The conference room in the Philippines

Richard Clemens (VDMA) answers the questions of the Indonesian journalists.

The drinktec press conference in Vietnam

After promoting drinktec during successful visits to four other European countries namely; Czechia, Great Britain, Poland, and Spain, towards the end of March – the drinktec roadshow then moved on to South America. The first stop on this continent was Argentina, the itinerary for which included not only a presentation event in Buenos Aires, but also visits to various vineyards and bodegas in Mendoza. Then in Chile, our trip was made even more enjoyable by a drink-tasting session. Petra Westphal then moved on to conferences in Colombia and Brazil, before heading home, having gained plenty of insight and having learned a great deal about the South American beverage industry. The drinktec team is very pleased that a large number of the representatives and delegations from the South American beverage industry have now accepted their invitations to drinktec 2017 and are set to travel to the event. There is a high level of interest within the wine, (craft) beer, and milk industries in particular.

Over the coming weeks, the drinktec roadshow will be visiting Russia, Switzerland, France, Turkey, Croatia, Slovenia, and Iran, with the aim of, once again, bolstering relationships in those countries. The team is very much looking forward to the upcoming trips and, like drinktec, will continue to just “go with the flow” as they embark on their travels.