At the birth of a new technology

Generally in my work, I report on technology that has already been developed – like new installations I see on my factory visits, or new products and innovations at trade fairs such as drinktec. Recently, however, I was privileged to be present at the emergence of a new technology – something I have very seldom experienced in my 30 years as a trade journalist. 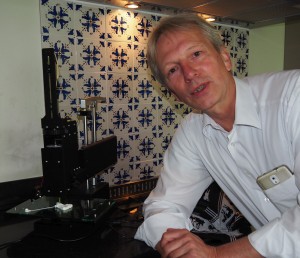 Via a trade-information service, my own web searches and, admittedly, a few happy coincidences, I came across the Dutch start-up company Printcheese, which is involved in 3D printing of food, using in particular paste-like cheese for this process. The idea for “printed cheese” started out a few years ago when Dutch farmer´s wife Michaela van Leeuwen was confronted with 3D printing in her work at the University of Wageningen, which has an international reputation for its focus on food and the environment. Immediately she thought of cheese! An idea prompted do doubt by the fact that her husband runs a farm with 100 milking cows!

Since then van Leeuwen has developed the technology and the process to an extent that more complex objects can be made in cheese, one example being corporate logos. She demonstrates the technique of printing cheese live at events, and has even been featured on Dutch TV. In the near future van Leeuwen wants to use 3D scanners to produce, for example, mini sculptures of consumers in cheese. The idea is also to print individually customized consumer products.

Now if you think this is all a bit of a joke, think again. Because in the long term industrial 3D printing could open up brand new ways of manufacturing and marketing cheese. The principle is no different in essence to the long-established extrusion process used in making processed cheese, it´s just in three dimensions.