A day dominated by meat

I just returned from an event that was actually a bid odd. Cultures specialist Chr. Hansen invited me to attend the 50th anniversary celebration of its plant in Pohlheim (near Giessen). Instead of producing bacteria cultures for milk products or cheese, it produces cultures for meat products and silage. 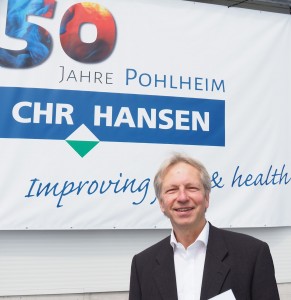 drinktec Blogger Roland Sossna was at the 50th anniversary for a Chr. Hansen meat cultures plant, but he didn’t get any meat the entire day.

So what was someone like Sossna, who only cares about milk, doing in a place like that? Was he once again just interested in some free beer and a good meal, a characteristic that makes journalists so special? If only that were true! No, I was invited by Chr. Hansen—sort of as the sole dairy guy—to document the event. Over all the years—I just had my 30th anniversary as a trade journalist—I have become somewhat of a specialist. But after what feels like the 100 million congresses, conferences and events that I have attended all these years, I should certainly be able to report on a celebration and everything said there in a manner that is fairly easy for readers to digest. It’s not a big deal really. All you have to do is practice. Besides, naturally I also feel a little flattered when others, especially a globally active company like Chr. Hansen, think of me …

To be sure, the event was absolutely dominated by meat, but I understood everything that was said. At least I think I did. Although, it was only dominated by meat in words and images. My stomach stayed empty. That’s because I just had to get back to my office to check on the gazillion e-mails that were waiting for me and post a few news items on moproweb.de. So I rushed out before things with lunch got serious. I guess you can’t have everything. And, of course, I have to keep an eye on those calories.